60 years of praying the Angelus with the popes

VATICAN CITY — Every Sunday and on many holy days, tens of thousands of people gather in St. Peter’s Square to recite the Angelus prayer with the pope.

And they have done so for 60 years.

Pope Benedict XVI in “the second window from the right” in 2013. (CNS/Reuters)

It is such a fixture of life at the Vatican and in Rome that tours to the Vatican include a guide pointing up to the Apostolic Palace and telling people, “The second window from the right” is where the pope stands on Sundays to lead the Marian prayer.

The prayer gets its name from its opening words in Latin — the language the popes use for their recitation of the prayer: “Angelus Domini nuntiavit Mariae” (“The angel of the Lord declared unto Mary”).

The Vatican newspaper, L’Osservatore Romano, carried an article yesterday describing the first public papal recitation of the prayer. It was Aug. 15, 1954, and Pope Pius XII was at Castel Gandolfo, the papal summer residence. Pope Pius had proclaimed 1954 a Marian Year and members of Italian Catholic Action wanted to celebrate the feast of the Assumption of Mary with special prayers. 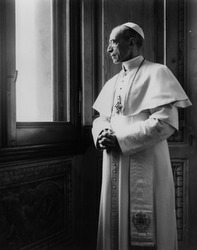 For centuries popes recited the Angelus in the morning, at noon and in the evening. Church bells throughout Italy and across Europe would ring to remind the faithful to stop and pray, honoring Mary’s role in the incarnation of Jesus.

Pope Pius fulfilled Catholic Action’s request to pray with him by allowing Vatican Radio into the summer villa to broadcast his midday recitation live.

“The experience must have pleased Pius XII because that autumn he willingly agreed to recite the Angelus with the faithful in St. Peter’s Square from the window of his office. Since that time, the world has come to know that window well,” L’Osservatore’s story said