Home Page | News | Footloose: Getting to Rome the old-fashioned way

Footloose: Getting to Rome the old-fashioned way

VATICAN CITY — Sporting blisters and a pair of split sneakers, Francesco Locatelli finally made it to Rome on foot from his northern Italian hometown of Sotto Il Monte — the birthplace of Blessed John XXIII.

The journey took him 27 days and he says it was worth every painful step to make it to tomorrow’s canonizations of Blessed John and John Paul II.

“Such an important event… I wouldn’t have missed it for the world,” he told me this afternoon in St. Peter’s Square. 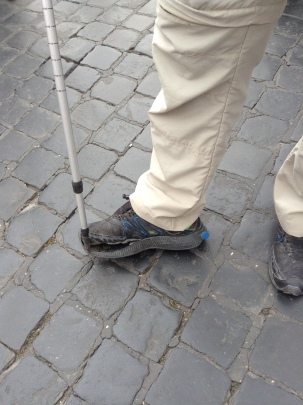 Locatelli went through two pairs of shoes on his pilgrimage from northern Italy. (CNS photo/Carol Glatz)

“I went through two pairs of shoes, my legs are dying, I’ve got blisters from going up and down the mountains,” he said leaning on his walking stick. But “dedicating one month of my life is nothing compared to what these two popes have done.”

Doing a pilgrimage is also a life-changing event, he said. “I feel different. It breaks you out of your usual routine and changes you — when you make such a huge effort and see others exerting themselves, too.”

Locatelli said Pope John always felt like part of the family. “He comes from the same place I come from. I’m a farmer, too, (like the pope’s father was) and we grew up on top of the same land.”

He braved the wet and cold Italian springtime as he made his way from his home and along the famous pilgrim path, the Francigena Way. He carried an official “pilgrim’s passport” that he got stamped along the route.

Staying at parish shelters and hostels, he met several other pilgrims coming to Rome as well, including two women and a man who spent three months walking from Poland. “We met in Viterbo and came to Rome together; now I lost track of them,” he said, looking over the huge crowds streaming into the square.

I asked if he planned on walking back home. “No, no! Taking the train. My wife hasn’t seen me in a month!”