Login / Register
Home / News / Off the fence? World Cup puts pope on offense vs. his own defense

Off the fence? World Cup puts pope on offense vs. his own defense

A Swiss guard looks on as Pope Francis arrives for a general audience in St. Peter’s Square June 11, 2014. (CNS photo by Paul Haring)

VATICAN CITY — Even though Pope Francis has repeatedly pledged to root for no one nation and Switzerland has historically held a stance of armed neutrality, those pacifist days may be over.

Pope Francis has reportedly declared, “It’s going to be war!” to his own defenders — the Swiss Guard — ahead of today’s World Cup match: Argentina vs. Switzerland.

The French news service, IMedia, reported that the pope was telling the very men who have vowed to sacrifice their own lives to protect him that it was war. All in jest obviously, and a fun indicator the pontiff will be keeping his eyes and ears open for the final score. 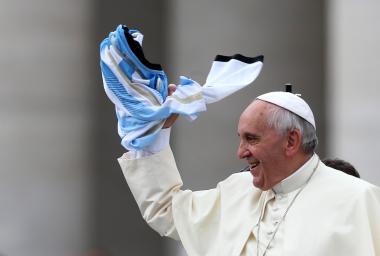 IMedia also reported that the guards invited the pope to come by their barracks tonight to watch the game on their big-screen setup, complete with artificial turf. The pope was said to have replied that “unfortunately” he couldn’t make it.

The last time the two countries faced off at a World Cup game was in 1966 with Argentina taking away a 2-0 win.

The pope’s home nation is favored 2-to-1 to win this knockout round and make it on to the quarterfinals. So it’s unlikely we’ll see a disgruntled pontiff like the one below roaming the corridors of his residence: 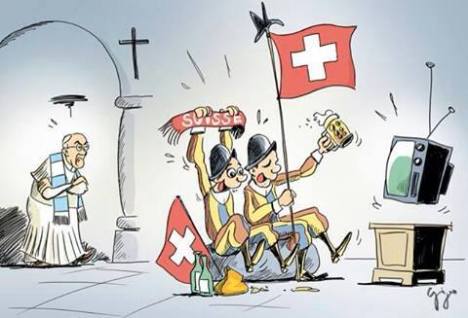