This beautiful Hildegard of Bingen Universal Human Greeting card is a customer favorite.  Measuring 5.75 x 4.5 inches, the greeting card is blank inside. Saint Hildegard of Bingen (1098-1179), the “Sibyl of the Rhine” who is now a Doctor of the Church, was an incredibly gifted woman of many talents: writer, composer, philosopher, polymath, Benedictine abbess, visionary, and mystic. This card will be a most fitting reminder to family, friends, and colleagues that “the glory of God is the human person fully alive, and the life of the human person is the vision of God” (Gloria enim Dei vivens homo, vita autem hominis visio Dei.  — Saint Irenaeus of Lyons, 2nd century).

Saint Hildegard’s depiction of the  “Universal Human” appears in one of the three volumes on her visions, which she wrote and illustrated.  In her vision of the “Universal Human” she beheld a series of concentric circles of air, ether, fire, and clouds, with the form of a human being at the center.  The form of the human body is proportioned as perfectly as the Vitruvian Man by Leonardo da Vinci 300 years later (right picture below). When both images are superimposed, they are in fact strikingly similar. St. Hildegard’s Universal Human also represents an ideal of perfection, but, unlike da Vinci’s Vitruvian Man,t is neither Classical nor scientific.  Her depiction is a cosmological body, that is to say, the human form as a microcosm of a supernatural cosmos, the truths of which are disclosed through revelation. 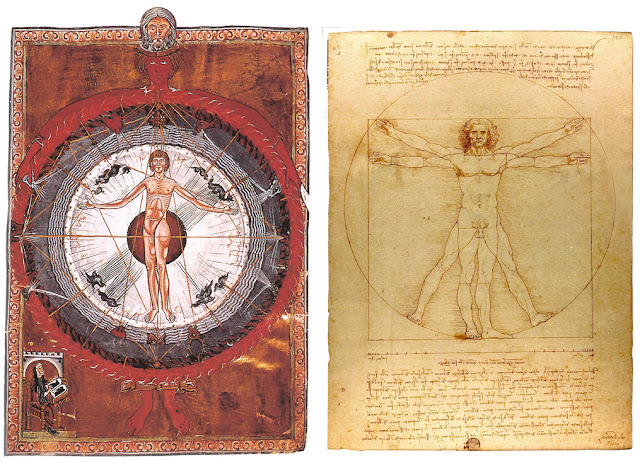 Saint Hildegard of Bingen – Mystic, Composer, Doctor of the Church

Saint Hildegard wrote major works of theology (including Sci Vias, as depicted on this plaque – go to History/Story tab).  She also related accounts of her mystical visions at a time when few women were even literate. Bishops, popes, and kings sought her out for her wisdom and counsel. She delved into and wrote treatises about the healing powers and medicinal uses of herbs, plants, animals,  and trees.  She is the earliest well-known composers of music. Her Ordo Virtutum is perhaps the oldest extant morality play and an early example of liturgical drama. Although she has been popularly held to be a saint for centuries, and more than one Pope has referred to her as such, she was never officially canonized. Pope Benedict XIV announced on May 10, 2012 that St. Hildegard of Bingen is now inscribed in the catalog of saints. On October 7, 2012, he then declared her a Doctor of the Church – along with three other female Doctors of the Church (St. Teresa of Avila, St. Catherine of Siena, and St. Therese of Lisieux) and 30 male Doctors of the Church.

There are no reviews yet