Pope Francis receiving a letter from a child during a visit to the Bambino Gesu children’s hospital in Rome Dec. 21. (CNS photo/L’Osservatore Romano via Reuters)

VATICAN CITY — If you sent Pope Francis a card or letter for his birthday, Christmas, and/or the new year, he says, “Thank you!”

Even though he likes to call or write back directly to the people who contact him, he knows he can’t do so for everyone.

So this Sunday he gave a general shout-out and heartfelt thanks to all his well-wishers, saying he received “many messages” over the holidays from all over the world.

First of all, I thank the children. And I thank young people, the elderly, families, parishes, religious women, Catholic associations and movements and different groups that wanted to show their affection and closeness. I ask everyone to keep praying for me; I need it, and to pray for this service to the church.”

Pope Benedict also thanked those who took part in a recent initiative that gathered hundreds of greetings and personal reflections, and presented him with a special box of pencils (his preferred writing instrument) to encourage him to keep writing. 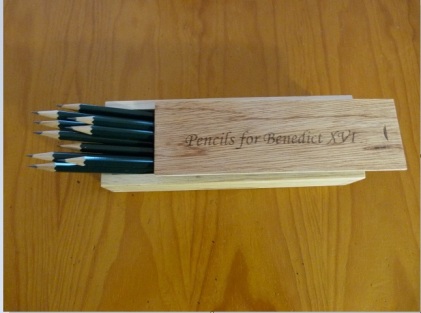 A box of pencils sent to retired Pope Benedict by a group of fans. Photo courtesy of Sonia Swabey.

The “Pencils for Benedict XVI” campaign gathered 479 messages from people worldwide. People were asked to highlight what the pope-emeritus means to them and how he has influenced their lives. 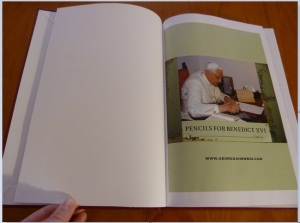 A hardcover book compiling people’s reflections on Pope Benedict. It was delivered to the retired pope before the holidays. Photo courtesy Sonia Swabey.

The reflections were compiled and published in a hardcover book that was then delivered to the retired pope along with the pencils.

The collection and gifts were organized by UK Web developer Sonia Swabey and her team at their website and forum www.georgganswein.com — a site named in recognition of the retired pope’s personal secretary and prefect of the papal household, Archbishop Georg Ganswein.