ROME — Bypassing strapped government funding, a community of Franciscan friars in Rome was able to raise more than a quarter of a million dollars in 30 days through the crowd-funding platform, Kickstarter. 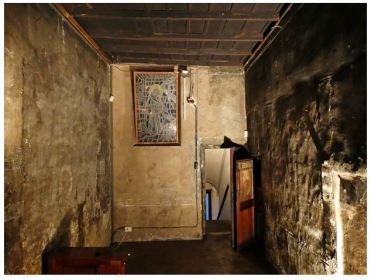 The small cell where St. Francis of Assisi used to sleep when he came to Rome. (Screengrab from the Franciscans’ Kickstarter webpage)

The Franciscans in charge of the Church of St. Francis at Ripa will be using the money to restore the darkened, crumbling cell where St. Francis of Assisi stayed during his visits to Rome.

More than 1,100 people, mostly from the United States, contributed to the Franciscans’ Kickstarter account, raising $130,000.

Organizers said the largest donation ($20,000) came from William Doty, the son of Catholic philanthropists, the late George Doty and his late wife, Marie, of New York City. While most donors were from the United States, contributions also came from Italy, the UK, Singapore, Dubai, Russia and Latin America.

The Franciscans turned to private donations through Kickstarter as a way to let people from around the world get involved in the project. They also didn’t want to approach the state for funding because they preferred scarce government funds be earmarked for needed social programs.

We here at Catholic News Service posted the story about the restoration project and the need for funding in mid-March — about half-way through the fundraising campaign. We reached more than 4,000 people with that post, but it was an April 1 article in The New York Times that gave the campaign its most effective fundraising source. Organizers said they got 171 offers and more than $23,000 from the link in the NYT’s story.

Work on the room’s soot-covered walls, rotting wooden ceiling, scuffed floors and flaking frescoes will start soon. The Franciscans would like it restored in time for this year’s Oct. 4 feast day of St. Francis. His namesake, Pope Francis, has been invited to the restoration’s unveiling that same day.