Witnesses to unsung miracles bringing prayers, thanks to new pope-saints

VATICAN CITY — Two witnesses to some unsung miracles will be in Rome tomorrow for the canonizations of Blesseds John XXIII and John Paul II.

Frances Mercado shows a rosary with an image of Blessed John Paul II. She saw the pope when he visited Denver in 1993 and Los Angeles and San Francisco in 1987. (CNS photo/Carol Glatz)

Pamela Pechanec from Topeka, Kansas, and Frances Mercado from Oceanside, California, have come to St. Peter’s Square to offer their thanks for the miracles they’ve experienced, they said, through the intercession of the two new (almost) saints.

I spoke to Pamela by phone as her bus from Rome’s airport was bringing a group of 88 people from Pittsburgh into Rome.

Her son, Jeremy, and his best friend, Jory Aebly, were shot in the head execution-style during a presumed robbery on the streets of Cleveland, Ohio, in 2009.

Jeremy didn’t make it and the doctors said Jory had no chance of survival as the bullet “had ricocheted three times inside his skull,” said Pamela.

As doctors put their medical skill and technology to work, the hospital chaplain administered potent spiritual power. Father Arthur Snedeker, a Cleveland diocesan priest, had been given a dozen rosaries blessed by Pope John Paul II before his death.

According to Pamela, the pope had told the priest that the rosaries were to be given to patients who were in terminal condition from gunshot wounds since he, too, had been shot and survived.

The priest gave Jory the last rosary he had of the 12 and prayed to John Paul. Jory not only survived, Pamela said he was able to walk and talk just weeks after the attack.

“I believe in divine intervention. I saw both boys in the hospital and I’m a nurse. I don’t know how Jory survived,” she told me.

Pamela said she had to come to Rome. “I met John Paul at World Youth Day in Denver at Cherry Creek” state park in 1993.

“I got close enough that he said, ‘Hello,’” she said. There was something about the way he looked at her “that I’ll never forget. He had that aura, you could see it.”

“You could feel something so strong when he spoke, that frail man and then that voice that came out,” she recalled. 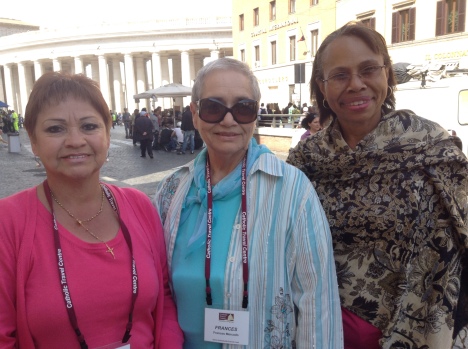 Silvia Gomez-Palacio from Our Lady of Loreto parish in Los Angeles; Frances Mercado from Oceanside; and Leslie Berenger from St. Charles Borromeo church in (Read More)