Home Page | News | From martyrs to moviestars: getting a Vatican stamp of ‘approval’

From martyrs to moviestars: getting a Vatican stamp of ‘approval’

VATICAN CITY — Most of the stamps the Vatican issues each year celebrate saints, popes or the birth or death of some late great European painter or composer.

Now and then there is a commemorative stamp marking a United Nations or Europe-wide year dedicated to themes such as water, books, forests and even the postal van!

Rarely has the Vatican stamp and coin office issued what it did this year: celebrating the 125th anniversary of the birth of Charlie Chaplin, “whose work impacted more than fifty years of the history of film,” the office said.

Some of the only other recent stamps celebrating “modern” and more secular artists have included: 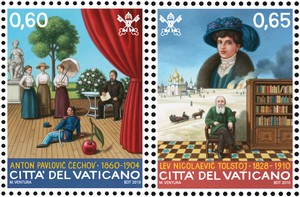 Sometimes the Vatican uses its collectors’ appeal for promoting important causes and raising funds for different initiatives, like when all proceeds from the sale of a 2004 stamp dedicated to children with AIDS were donated in the pope’s name to projects helping AIDS orphans.